With Team UKZN and Hulamin

In October of 2015 I had the great privilege of being invited by the University of KwaZulu-Natal Solar Car Team to join them and their car, Hulamin, at the Bridgestone World Solar Challenge in Australia. Having past experience with composite materials (in the areas of design, testing, manufacture and analysis) I was able to fulfil the role of technical advisor and mentor to the team of final year and post graduate students involved in the project.

The journey to compete on the world stage started way back in 2012, where development work began on the predecessor to Hulamin, a car by the name of Apalis (shown below) that competed in the Sasol Solar Challenge in South Africa in the same year. Apalis had a good run on her maiden voyage and finished ahead of the other local teams, fetching third overall, being beaten only by the then world champion Japanese team from Tokai University and the second Japanese team that were using an earlier version of the Tokai car. 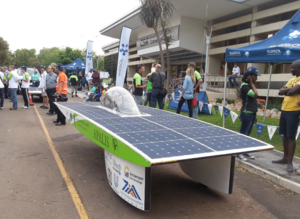 After the 2012 Sasol Solar Challenge, a second car, Iklwa, was built. Iklwa was designed to have a lower drag coefficient and reduced weight when compared to the 2012 car and participated in the 2014 Sasol Solar Challenge, again finishing in third place overall and ranking first of the South African teams. The team’s success in the local arena boosted the confidence level to a point that everyone involved knew that the South African Team from the University of KwaZulu-Natal was ready to set foot onto the International stage and compete with teams from around the World in the Bridgestone World Solar Challenge.

And so Hulamin was born, a sleeker, nimbler and higher performance version of her predecessors.

The team bid farewell to Hulamin just before the start of Spring 2016, as she set sail for Adelaide. Three weeks before the start of the Bridgestone World Solar Challenge, the vehicle assembly team (including two of the drivers) arrived in Adelaide to receive the car as she completed her journey across the ocean. They spent their time assembling the car and then driving from Adelaide, in South Australia, up to Darwin in the Northern Territory, covering the course in reverse in preparation for the event (see route map below). Two weeks after the assembly team arrived in Adelaide, the remaining team members departed from South Africa to meet the car (and team) in Darwin and help get the car tuned for the trip. 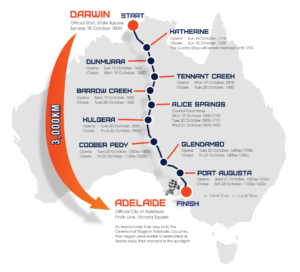 The video below shows the arrival of the car in Adelaide and the gathering of the full team in preparation for the challenge.

At the Hidden Valley Raceway, in Darwin, further preparations continued in the form of installation of an experimental cooling system, setting up of steering, suspension and brakes, as well as testing of control and telemetry systems. Once the vehicle setup and tuning was complete, it was time for her to be transported to the Darwin Show Grounds for scrutineering by the officials (see below). Scrutineering involves rigorous inspection of the Solar Car to ensure that she complies with event regulations, including aspects of safety and event rules.

After successful scrutineering (and further testing of the car) it was time for qualifying (below). Team UKZN qualified in 17th starting position out of 29 teams, setting a lap time of 2min 21.91 sec, at an average speed of 72.8 kph. 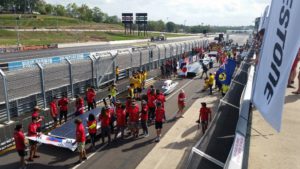 Qualifying at the Hidden Valley Racetrack in Darwin,

On the morning of Sunday 18 October, it was time for the team to depart from Parliament House in the Darwin State Square with cars assembling at 05h00 and departing at 08h30. Lead and follow vehicles start with the car and remain in place for the entire event, within a specified distance of the solar car. The other support vehicles typically scout ahead to survey upcoming conditions and radio information to the follow vehicle which is then relayed to the Solar Car driver. In the follow vehicle, the strategy is continuously evolving as conditions vary dynamically, influenced by factors such as the inclement weather, battery levels and condition of the drivers and car.

At the end of Day 1, Team UKZN was sitting in 12th position, just one spot behind the fellow South African team from North West University (NWU). With a little bit of planning and a lot of luck, the team was able to find a cosy campsite somewhere in the outback between Katherine and Dunmarra. A quick check for any creepy crawlies and setting up of the first campsite proceeded in a very methodical fashion, as everyone knew what they needed to do. Soon thereafter a hearty meal consisting of Mediterranean cuisine, in the middle of the Australian Outback, got underway. The following morning, we were awakened by the sound of Johnny Clegg’s ‘We are scatterlings of Africa…’ and, although some may have felt that this was a rude awakening, it seemed an appropriate anthem for the start of Day 2 of the challenge. Then it was time for some to prepare breakfast, some to pack up camp, whilst others ensured that the early morning charging of the car’s batteries proceeded as planned (see below). 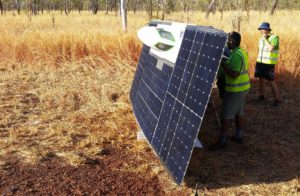 Charging the Car on the Morning of Day 2, Somewhere between Katherine and Dunmarra,

At 08h00 on 19 October 2016, Team UKZN was once again on the road, looking out for roadtrains, roadkill and cattle grids whilst carefully tracking the progress of the Sun and planning the optimum speed for Hulamin’s journey through to Tennant Creek and beyond. Still sitting in 12th position, having gained a ten-minute lead on the NWU team, Team UKZN was able to stop over at a campsite near Bonnie Creek for some well-deserved rest (picture below). You would be forgiven for thinking that the scatterlings of Africa hadn’t even left the motherland. 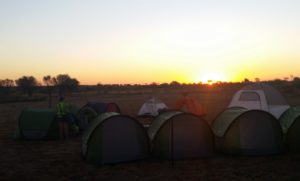 Day 3 was definitely one of the more exciting days, with Team UKZN finding themselves jostling for position with the NWU Team with their car Sirius X25 and The Toronto Team, Blue Sky Solar, travelling wih car Horizon. At the Alice Springs control stop there was only two minutes separating the three cars with Horizon in the lead, followed a minute later by Hulamin and a further minute for Sirius X25. Towards the end of the day, the support and scout vehicles pushed ahead to survey for a suitable camp site that would include good sunlight for afternoon charging. At around 16h45 it became clear that we were headed directly into an approaching storm. The team stopped short of the storm to ensure the availability of sunlight for charging. By morning departure, at 08h00, Hulamin was fully charged and ready to roll out.

Day 4 was the decider, where 11th place of the three teams jostling for the spot would be determined. Between Kulgera and Coober Pedy Team UKZN seized their chance, and managed to take the lead. The glory was, unfortunately, short lived as Hulamin pulled over for a driver change she met with a bad road surface at fair speed. The abrupt change in road conditions resulted in a blowout, requiring a tyre change. Immediately thereafter the driver reported handling difficulties. Our average speed dropped significantly. After making it to the Coober Pedy control stop and inspecting the vehicle closely, it was clear that the steering system had sustained significant damage under the abrupt load that occurred during the blowout. At this point Horizon had taken the lead, followed by Sirius X25, nine minutes later, with Hulamin fourteen minutes after that. Scheduled to depart from Coober Pedy at 16h20, with driving curfew at 17h00, the decision was made to stay the night in Coober Pedy and make the necessary repairs to the damaged steering. A few team members stayed up until early morning making the necessary repairs to the steering so that Hulamin was again ready to roll out at 08h00. 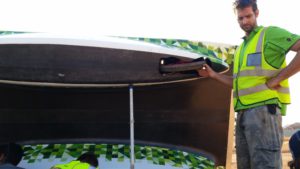 ‘What to do about this damaged steering?’, 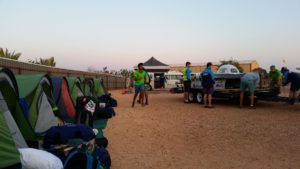 Getting ready for Steering Repairs in Coober Pedy, 21 October 2015,

Day 5 of the challenge and the team’s tenacity would be further tested. We made it smoothly to the first control stop, cutting our fifty-four-minute deficit down to thirty-nine minutes by Glendambo. Team UKZN trailing Blue Sky Solar, with NWU’s Sirius X25 having a three-minute lead over the Horizon. The team now feeling relaxed and confident that they could handle whatever the outback would throw at them (see Glendambo below). It wasn’t too long after that that one of our two Lady drivers was engaged in a sideways drift with Hulamin down the Stuart Highway as a countermeasure to the heavy crosswinds. A quick drive-by inspection from the support crew confirms a half flat left rear tyre and it’s time to stop for a quick tyre change (see below). 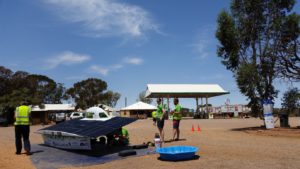 Chilling Out at Glendambo Around Midday, 22 October 2015, 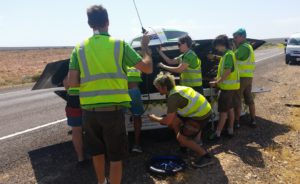 By the time we reached Port Augusta it was NWU in 11th place with a time of 42 hrs 46 min, Blue sky Solar in 12th position with a time of 43 hrs 50 min 54 sec and Team UKZN in 13th with a time of 43 hrs 30 min. Just outside Port Augusta our driving ended for the day as we stopped outside the JDM X Drift Track. It seems our Lady Driver had a premonition of what lay ahead. A quick call to the track owner and we were extended some Australian hospitality and given kind permission to make use of the track grounds as a campsite for the night. A big thanks to James Dean Mardle and JDM X (the track below). 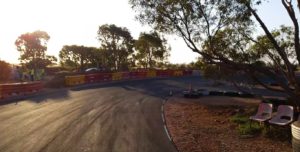 The following morning, we bid farewell to the drift track as we looked forward to our last day of the Bridgestone World Solar Challenge 2016. We would hold our position for the remainder of the course to claim 13th out of 27 in the Challenger Class, with NWU claiming 11th and Blue Sky Solar in 12th. We had cut our deficit to 12th place from fifty-four minutes down to thirteen minutes – an impressive end game but just not enough to squeeze out an extra place. Our lucky number was thirteen and the team was proud to have competed in such a prestigious event. The winning time was set by the Nuon Solar Team from the Netherlands in their car Nuna8, in a time of 37 hrs 56 min 12 secs. A big congratulation to the winners as we celebrated our achievements and ability to withstand the harsh conditions and numerous challenges that the unforgiving Australian Outback had thrown at us. To the event organisers, fellow competitors, project supervisors and sponsors, we express our gratitude for being afforded this unique and rewarding opportunity.

In closing, a happy end to an epic journey.